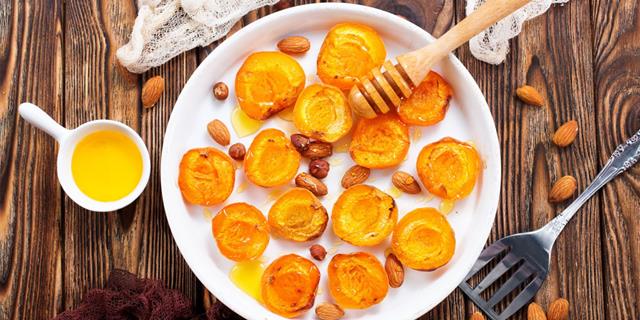 Because apricots bruise and spoil easily, most people opt to preserve their apricots during apricot season. You can make them into pies, jam, or even dry them, which preserves their nutrients. We share numerous apricot recipes on the blog that you’ve got to try for yourself!

But did you know that the meat of the apricot fruit isn't the only thing you can eat? You can also consume the seeds, which look like a small almond.

Apricot kernel recipes look different depending on where in the world you are.

In Egypt, people consume ground apricot kernels with coriander seeds and salt to make a traditional snack called dokka. Europeans often put a kernel in a jar of jam or jelly to enhance the flavor. Italians often crush the seeds to make their famous Amaretti di Saronno cookies. And Asians stock apricot kernels in the spice aisles of the grocery store.

Apricot seeds are rich in protein and fiber. High amounts of oil rich in essential fatty acids can be extracted from the seeds. This oil can be used in cosmetics and cooking. The seeds are believed to be the healthiest part of the fruit because they contain vitamin B17 (amygdalin), which is primarily used to help support a healthy immune system.

Here are 7 healthy apricot kernel recipes that you should try:

Take advantage of what apricots are best for — sweet treats. These apricot recipes create a healthy balance that will satisfy your sweet tooth.

Marzipan is a confection made primarily of egg whites, sugar/honey, and ground almonds. Since apricot seeds have been described as having a similar texture to almonds, you can easily substitute almonds for apricot seeds.

Before you start worrying, you should know that marzipan is pretty easy to make! Not only is it made up of just a few ingredients — making marzipan does not require the use of a stove or oven. Simply mix all the ingredients and chill before consuming.

Here’s the recipe for the apricot kernel version of marzipan.

Eggnog is certainly a favorite during the winter holiday season. If you’ve gotten this far in life without consuming it, eggnog is a dairy-based beverage traditionally made with milk, cream, sugar, whipped egg whites, and egg yolks that can be served chilled or warm.

This apricot kernel recipe calls for the use of ground apricot seeds, which add a little texture and nutty flavor to the drink.

Apple bites are an easy-to-prepare snack using cream cheese, raisins and ground apricot seeds. The apricot seeds add a crunch to the snack, while the raisin serves as a sweet surprise inside.

Check out the apricot kernel recipe for apple bites.

Bavarian cream is a dessert consisting of milk thickened with egg and gelatin, topped with whipped cream. It is set in a cold mold and is unmolded for serving. Easy to customize, you can make it your own by adding various ingredients.

For instance, try substituting apricot seeds for a different take on the traditional almond flavor. As a reminder, apricot seeds are rich in many nutrients that your body craves.

A palmier is a pig ear or elephant ear-shaped French puff pastry. A puff pastry is made with alternating layers of dough and butter, rolled and folded over to create hundreds of flaky layers.

In a flavorful twist to the classic palmiers, try adding an apricot glaze instead of the usual cinnamon, and top it off with apricot seeds for a little extra crunch and to add some vitamin B17 to your body.

Check out the apricot kernel recipe for apricot glazed plamiers.

Apricot seeds aren't just ideal for desserts — you can also use them in more savory dishes.

Pesto is a sauce typically made from crushed basil leaves, pine nuts, garlic, parmesan cheese, and olive oil. It’s typically served with pasta but you could also spread it on bread or veggies, depending on what you’re into. It’s great as a dip for appetizers or as stuffing. If you’re still looking for more ideas, it’s a good pizza topping and also goes well with salads.

For this apricot kernel recipe, the apricot seeds are mixed with the nuts.

There are two types of apricot seeds: sweet and bitter. Bitterness can be an indicator of the amount of vitamin B17 that the seed contains. The more bitter the seed, the more vitamin B17 it contains, with California-grown apricot seeds containing the most vitamin B17 potency over other species.

If you're just getting started with apricot seeds, here’s a recipe that combines different flavors to mask the bitter taste.

Whether you’re more interested in sweet or savory, there are several ways to enjoy apricot seeds. Since they're similar to almonds, in general, you can use them as a replacement for almonds in recipes. Just be careful in choosing which recipes you’re going to use them for, as there are two variants of apricot seeds: sweet and bitter.


Do you have an awesome apricot kernel recipe that we forgot to mention in this list? Tweet your thoughts to @ApricotPowerB17.